Economic data in the US has been mixed year-to-date, but the weight of the evidence remains positive. Conditions are consistent with slower but continued economic growth. A recession is unlikely. We are cautiously bullish.

Trade and policy uncertainty have impacted business spending. CEO confidence has sunk to recessionary lows. Corporate earnings growth is slowing due to the waning impact of tax cuts, continued dollar strength, and weaker global growth. Manufacturing activity is in a slump and portions of the yield curve remain inverted.

On the positive side of the ledger, the housing market has bounced back solidly from last year’s slowdown, unemployment is at a 50-year low, and wages are growing at a reasonable pace. The Federal Reserve is easing and continues cutting interest rates. Credit conditions are favorable. Consumer confidence and spending remain robust. The US equity markets continue to climb the “Wall of Worry,” and remain near new highs.

The Economic Policy Uncertainty Index has reached a new peak. Trade policy is now in uncharted territory as China and the US are entrenched. As a result, CEO confidence surveys sank to their lowest levels since 2009, creating headwinds for CapEx and overall economic growth.

In September, the Institute for Supply Management (ISM) Producer Manufacturing Index (PMI) fell to contractionary levels, its lowest reading since June 2009. The Markit US Manufacturing PMI, a broader survey, has shown a bounce but remains at neutral levels. We have seen similar signs of bottoming in global manufacturing indices. The trend is concerning, but it is important to take a step back when considering historically leading indicators like PMI. Economics is an evolutionary study and cannot be viewed without context. Since the 1960s, the US economy has shifted to be more service oriented, and the significance of manufacturing in the economy has declined. This was exemplified in both 2012 and 2016 when the ISM Manufacturing Index dipped to similar contractionary levels but the US avoided recession due to strength in other sectors. See Chart 1 for further detail.

The Fed remains accommodative. They have already cut rates twice this year and a third is expected at the end of October. A clear statement has been made that the door is open for more easing if economic data deteriorates further. This infusion of liquidity should cushion the slowdown and support markets. Historically, there is a 6-9 month lag to monetary policy impact. We expect to start seeing these efforts reflected in the economy towards the end of the year and into early 2020.

As we have discussed in previous letters, housing market activity has accelerated in recent months. This has been driven by low mortgage rates and pent up demand from demographic shifts. Existing and new home sales, as well as building permits, have recovered from 2018 lows and are back to a healthy trend. The recent strengthening of the housing market is a tailwind for the current economic expansion.

US labor markets continue to be strong. Our unemployment rate has dropped to 3.5%, a 50-year low. Wage growth continues to trend positively. Household balance sheets have also improved to levels not seen since 2001. Consumer confidence remains elevated, as shown in Chart 2, and personal consumption metrics remain strong.

Growth stocks have been in a secular bull market for the last decade, benefiting from slow economic growth and negative news flow. During the third quarter we observed a short but vicious rotation out of growth and into value stocks. This event raised concerns of potential regime shift within the market but overall, there has not been follow through and confirmation (a notable exception being seen in the software sector). We find it hard to believe value is going to come roaring back with the financial, healthcare, and industrials sectors dominating the category. Financials will need interest rates to rise, healthcare will be held back by campaign rhetoric, and industrials will not materially shift without a trade agreement. We are tracking this closely and are ready to correct course if warranted.

Earnings remain on a slowing trajectory due to continued digestion of corporate tax cuts and tough year-over-year comparisons. According to Factset’s Earnings Insight on October 11th, the year-over-year S&P 500 blended earnings growth rate is anticipated to be -4.6% for Q3 2019. Expectations are for earnings to turn positive in Q4 and return to high single digits in 2020. Valuations continue to be reasonable with the S&P 500 forward 12-month P/E ratio at 16.6, equal to the 5-year average.

There are more signs of slowing economic growth, exacerbated by high economic and trade policy uncertainty. For now, the weakness is countered by strength in labor, consumer, and housing markets, and there is enough monetary stimulus in the pipeline to avoid recession. Sentiment has reached extremely bearish levels. Thus, we see potential for a strong move upward with any positive surprises.

We are disciplined; focused on the facts, fundamentals, and long-term trends most relevant to your investments. To reiterate, our outlook has become cautious, but the weight of the evidence remains positive.

1. ISM and Markit US Manufacturing PMI 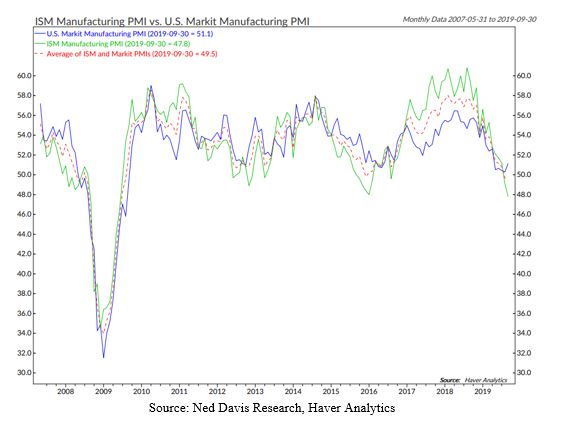